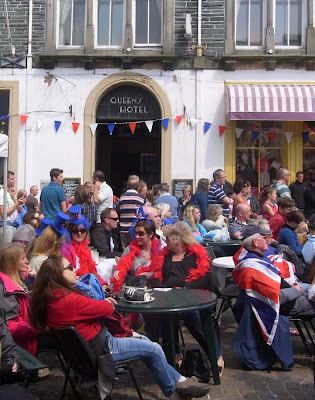 The Queens Hotel, Keswick!
What a fantastic day it was yesterday,I did watch it all and thought it was amazing, loved the outfits, hats, thought the Queen's Yellow Ensemble complemented with everything, the colours where stunning. Keswick came alive in the market square. Tourists and locals enjoying the Sun, watching it all on the big screen, silly me got the dimensions wrong in the last blog, a 12 metre square screen, is not 12 x 12 as I was expecting! 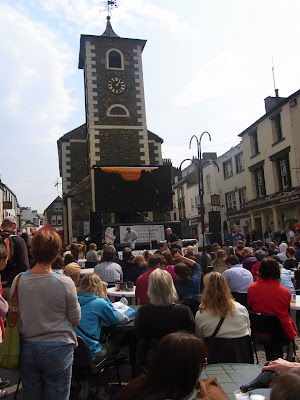 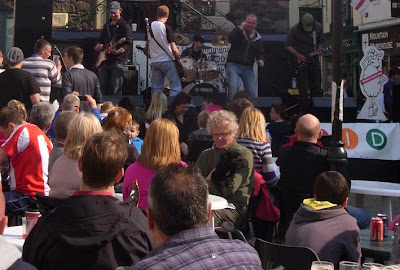 Here is Keswicks' Dead Beats' giving it rock all, they ended the afternoon celebrations with cheers of 'More'
Posted by Lakeland art at 11:01 1 comment: Links to this post 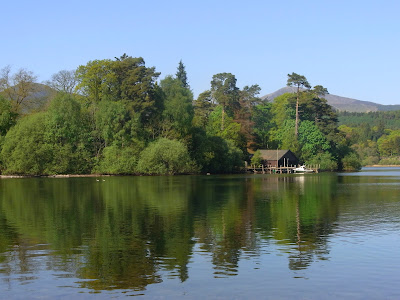 Dare I say the weather is still beautiful here in the Lakes. Derwent Island snapped this morning
the Trees are all coming out in bloom, you can hear the Woodpecker tapping away, no Cuckoo yet but the Swallows are back. So enough about how totally stunning the Lake District is at the moment. Keswick is getting itself ready for the big wedding tomorrow. We have a large 12 metre square screen in the market place, food stalls, and live bands and everybody seems very excited I'll take the camera and keep you posted.
Posted by Lakeland art at 21:19 1 comment: Links to this post 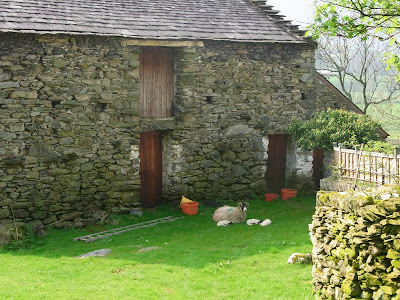 Spring is wonderful up here in the sunny Lake District, everything is coming out in bloom, the colours in the Trees are just wonderful. Starting to really count down the Wainwrights, only a lucky 13 left now.
We started the walk at the end of the Kentmere, in a peaceful valley where the main noise was that of the woodpecker. 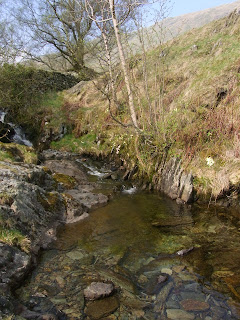 This little stream had many wild Primroses and Violets growing on the banking side.
Walking steeply up Shipman Knott, stopping to catch a quick breath,  then onwards to Kentmere Pike. One of the joys about doing the Wainwrights is that you get to know the peaks and valleys like old friends. Harter Fell was next on the list and so striding out along the ridge we soon came to the Cairn. But with another Cairn not far away, now which was the highest? This is one of the silly things about doing the Wainwrights I some how feel I need to make sure I've been to the highest point! So off we tramped to the second Cairn, But for those who do the same it was an illusion, it was lower in height! Back to base One.
Some mountains do look flat and a little uninteresting but Mardale Ill Bell is not one of those, a rough narrowing ridge path drops to Nan Blield pass at 2,100 ft, before rising again to the summit, with spectacular views down to Small Water Tarn below and beyond Hawswater. Nan Bield was the ancient trading route between Kentmere and the now drowned village of Mardale Green,  Near the shore of Small Water on the descending path are a number of stone shelters, pointers to the earlier importance of the pass. These each provide refuge for one person in extremes, entrance being via crawling. You can guess that I did not go crawling in, Spiders! and maybe Snakes! 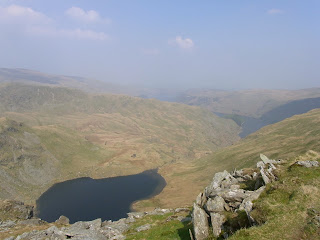 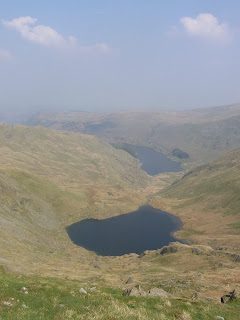 Posted by Lakeland art at 12:08 No comments: Links to this post 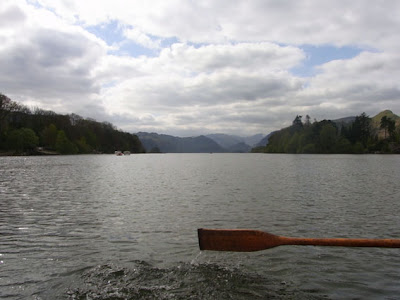 For the Watercolour weekend in Keswick we had mixed weather a little cloud (Cobalt and Burnt Umber), a chilly wind (Hot Chocolate for warming the hands) and Sunshine and warm Blue skies( Cobalt and Cerulean) and adventure!! This been in the form of an in pronto ride on a rowing boat, it felt the perfect way for intrepid artists to cross Derwentwater with their watercolours clutched at hand. The launch company in Keswick jumped in to help when we could not get onto the full boat and so offered to row us across the lake, what service this is, and what a flutter to the heart it gave. 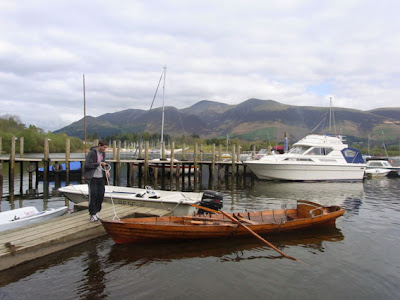 Here is the strong rower. 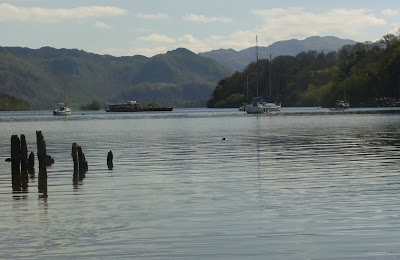 A perfect painting spot away from the crowds, with just Geese, Ducks and a Heron for company 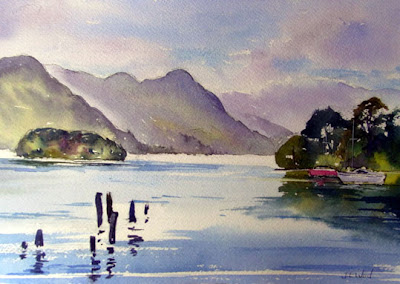 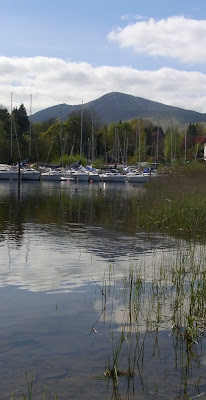 Towards Grizdale Pike, another view for another day.
Posted by Lakeland art at 12:15 No comments: Links to this post 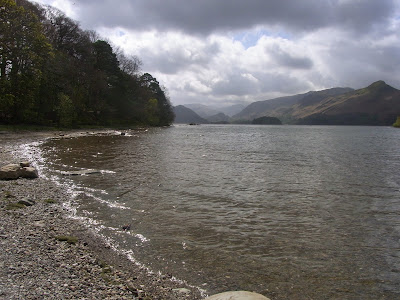 Let me try and and tell you why I enjoy painting outdoors. It starts with the feel a place, sitting or standing and just having time to gaze, letting the eyes find interest in areas of light, colour, drama or even peaceful intimate corners. Then it's time to sketch a quick thumbnail is often all you need if time is the essence. Then the magic takes over lost in a world of beauty, concentration at the highest level, finishing with a sense of peace, if not always satisfaction.
I've checked the weather forecast for this weekend and whoop for joy it seems like it will be sunny and dry for the 1st outdoor painting weekend of the year, if you fancy coming along, I've got a couple of places left.
The photo above of Derwentwater is our first base camp of the weekend * Please note no camping is included*
Posted by Lakeland art at 11:43 1 comment: Links to this post

Best walking area in the world 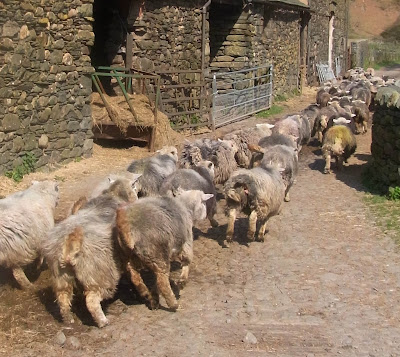 We parked at Seathwaite and started our walk to Lingmell, meeting Peter the farmer just about to let his Herdwicks out to graze, and has you can see they were keen to get out onto the fells. Peter asked where we were heading ' Up to Lingmell' was our keen answer, he scratched his head and asked' Why do you want to go all the way up there' my reply 'well to see the view' we left him shaking his head. 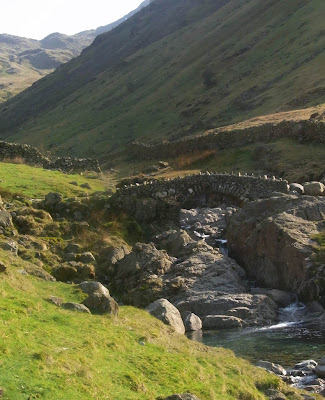 Walking from Seathwaite you come to the famous Stockley Bridge, this I think is my favourite bridge, the water is so clean,  pure and sparkles with many colours in the sunshine. 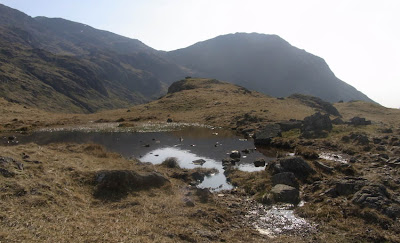 We walked up the 'Corridor route' with Lingmell on the right and Scafell Pike on the left a real classic Lakeland walk. 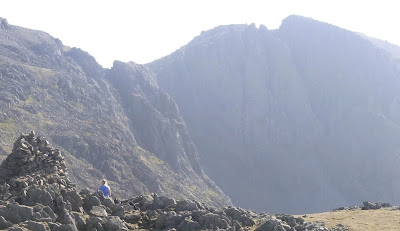 Catching my breath at the top and a quick sketch of Scafell, this really is a special place. Walking back down towards Seathwaite, we decided that 'this must be the best walking area in the World'
Posted by Lakeland art at 20:30 3 comments: Links to this post 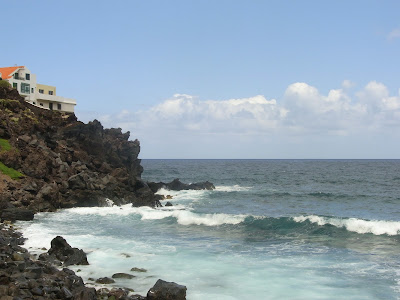 I'm inspired by waves at the moment, the colours from Dark Prussian blue, Transparent Turquoise ending with Opaque creamy Turquoise. But I wonder like a waterfall, is another sense kicking in 'The sound of crashing waves' now that is difficult to paint!! I also wonder can it be done in watercolour, I think so but it needs maybe to be more atmospheric and dramatic, But and a big but there is no way I'm going to do what 'Turner' did and fasten myself to the top of the rigging on a boat. A harbour side cafe will be just fine!! 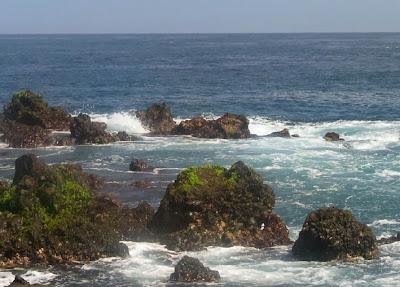 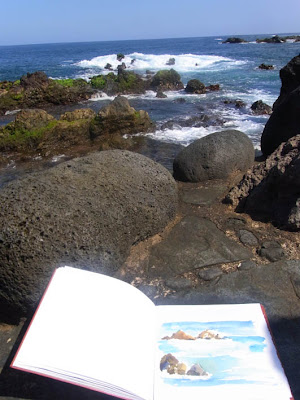 There really is nothing like painting en plein and trying to capture waves in quick small studies is great fun. Straight in with watercolour, and loved the freedom of not sketching with a pencil beforehand, I had wondered what colours to use to get that gorgeous milky blue, and been on the spot Naples Yellow and Transparent Turquoise seemed just right.
Posted by Lakeland art at 11:16 2 comments: Links to this post

Hi here is a link to my Artfinder Shop and Etsy Shop showing lots of my new paintings, or send me an email lakelandart@hotmail.co.uk 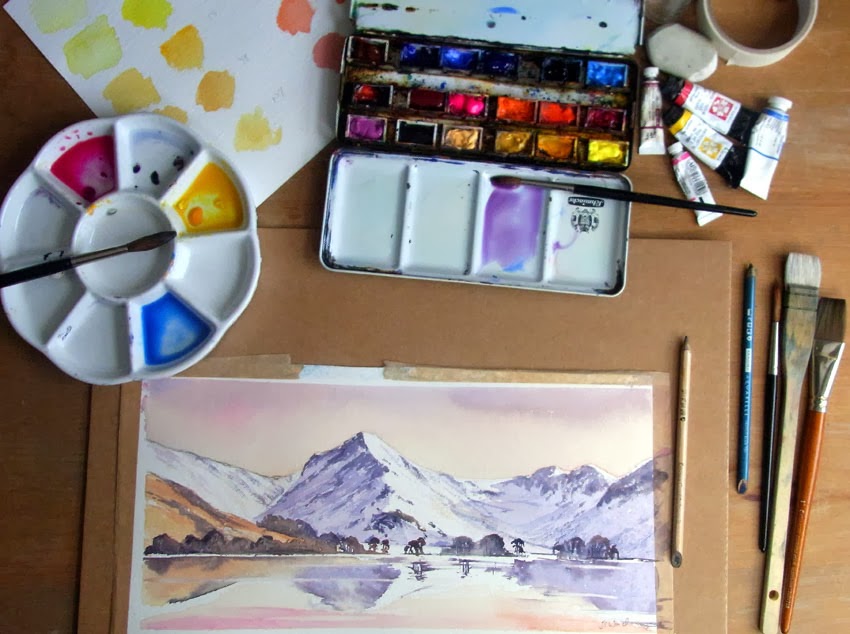 www.watercolourcourse.co.uk
Start watercolour painting today with Jane Ward. Learn many techniques to give you confidence to paint in this magical medium. Colour mixing, tonal values and personal feedback with each of the six projects. Price £60.00

Thank you for taking time to look around my Art blog, I'm a full time artist who loves painting and photographing life and landscapes as they inspire and delight me. Writing this blog gives me a wonderful audience to share my scatty and colourful world with.